The best part about travelling is undoubtedly the food. While I love cheap eats like food karts and roadside stalls, there’s something about eating somewhere fancy that just feels really satisfying. During my recent trip to Croatia, Restaurant Dubrovnik located in Old Town Dubrovnik served as an amazing introduction to Croatian fine-dining.

Restaurant Dubrovnik is located down a nondescript alley inside the historic Old Town center of Dubrovnik. If it weren’t for it’s high ratings and visibility on TripAdvisor, we would had not known where to look!

The first thing you’ll notice as you enter the restaurant is that all seating is up on the roof – pretty unique compared most other restaurants in Old Town that are tucked into cramped spaces. Restaurant Dubrovnik is super spacious! Although there really isn’t much of a view, breathing in fresh air and feeling the breeze from the Adriatic Sea definitely adds to the atmosphere of the meal.

The menu at Restaurant Dubrovnik is pretty trimmed down and features only 20-30 items. We ordered their most popular set, the 8 course chef’s choice tasting menu.

(For a closer look at the menu, you can open it in a new tab)

The total cost of the tasting menu was 590 Croatian Kunas or around $93.30 USD as of September 21st, 2018. By New York City standards, fine dining in Croatia is incredibly well-priced (read: cheap)! 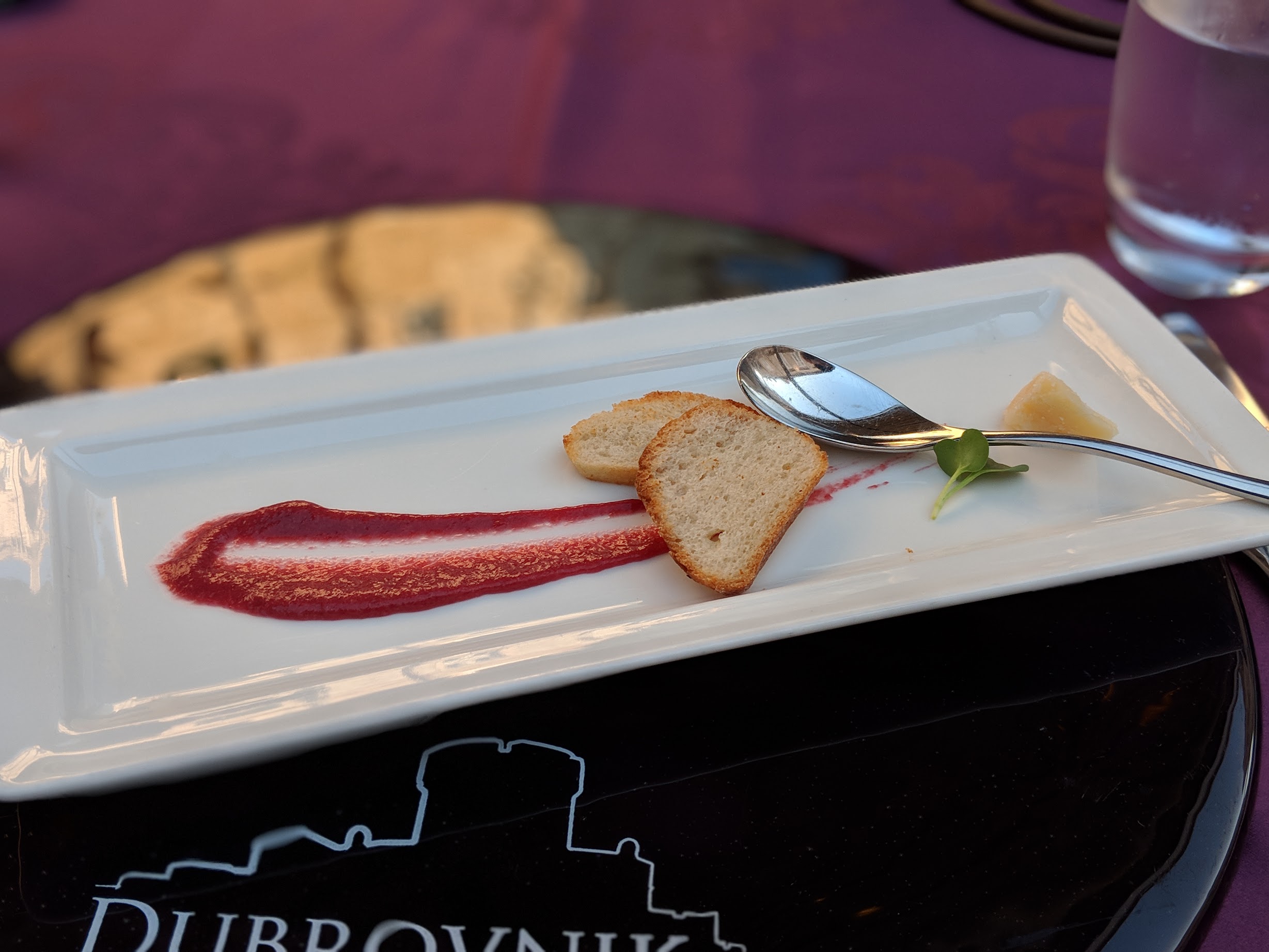 The chef’s welcoming bite was two miniature pieces of crunchy toast served with a raspberry-cranberry sauce, aged  Parmigiano-Reggiano cheese and a sprig of, well, some unknown herb I couldn’t identify.

My first thought was: “How do I eat this?”. Clearly, we are supposed to construct it like a sandwich but it was awkward given the small pieces of toast and the way the sauce was smeared on the plate. Plus, we were only equipped with a tiny metal spoon (what are we even supposed to use it for?).

It took some effort, but I finally assembled my chef’s welcoming Snackable. Personally, I felt like the flavours didn’t mesh very well. The dryness and sharpness of the cheese really clashed against the wet and fruity sauce. 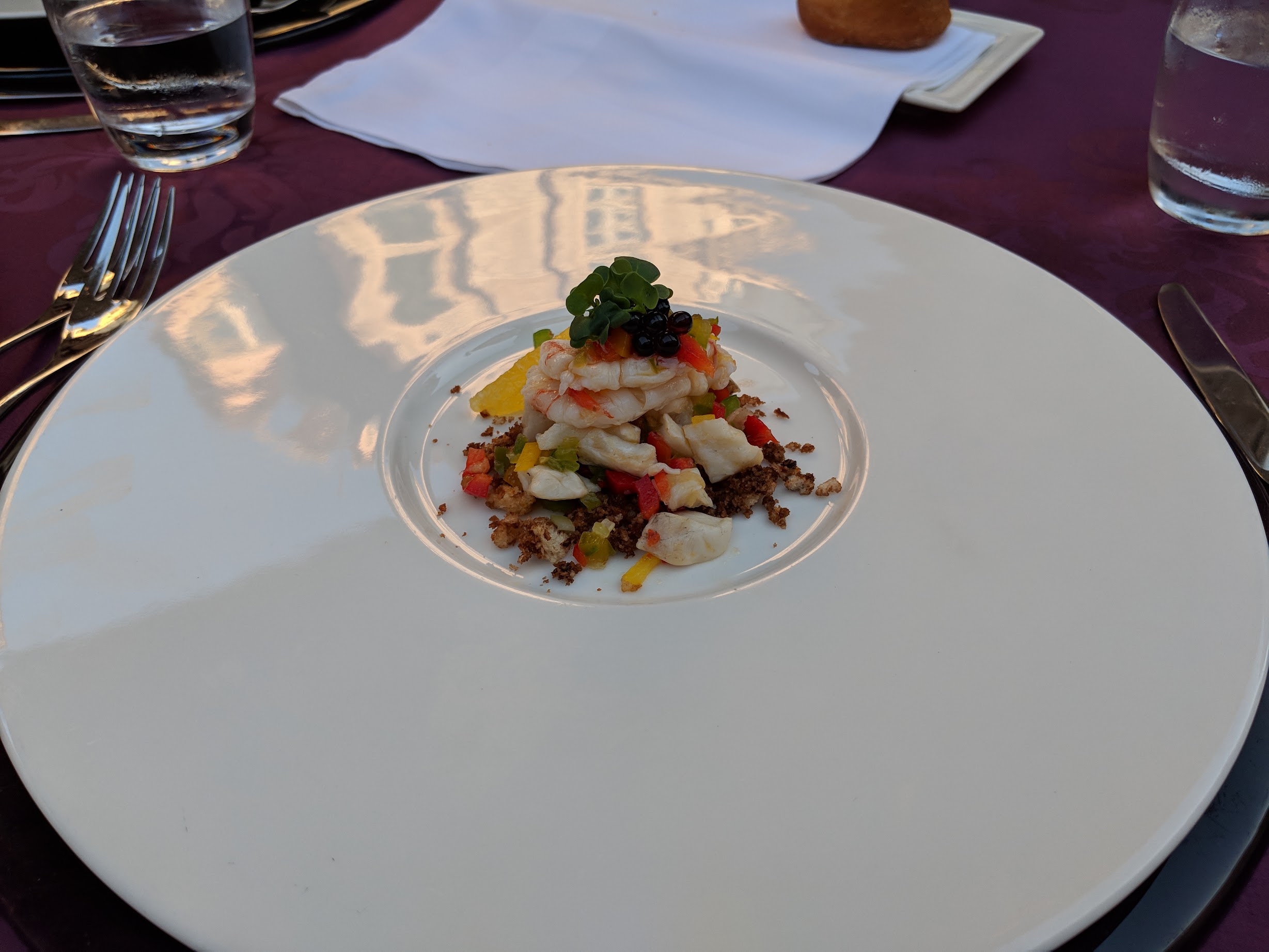 The plate:food ratio of this dish was way too high.

For those who don’t know, ceviche is “a seafood dish typically made from fresh raw fish cured in citrus juices, such as lemon or lime, and spiced with ají, chili peppers or other seasonings including chopped onions, salt, and cilantro” (thanks Wikipedia!).

Restaurants Dubrovnik’s take mostly fit the mold of a classical ceviche but with one twist. Instead of the tomatoes that you would find in latin-style ceviche, they instead substituted a more neutral red and yellow pepper that added colour but played better to the citrus flavours. The fish and shrimp were incredibly fresh and the citrus elements accentuated their natural taste. 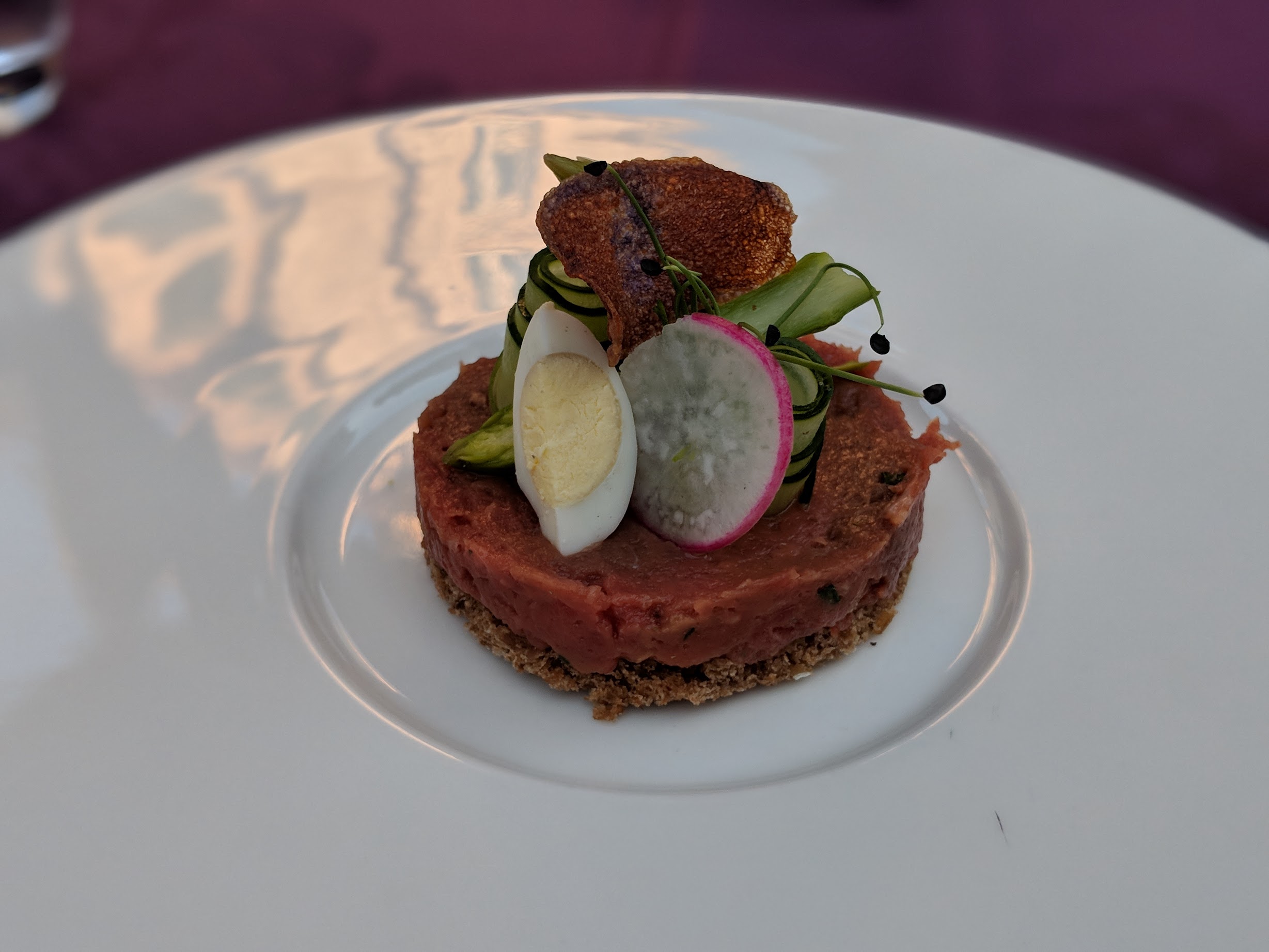 I was convinced this dish would take me to Flavourtown – I mean, look at that presentation! I was ready to get on the taste bus (get it?) but it sadly never left the station. I think they actually forgot to season it. It tasted so bland that the rye bread overpowered the beef, which really just ruined the whole plate. 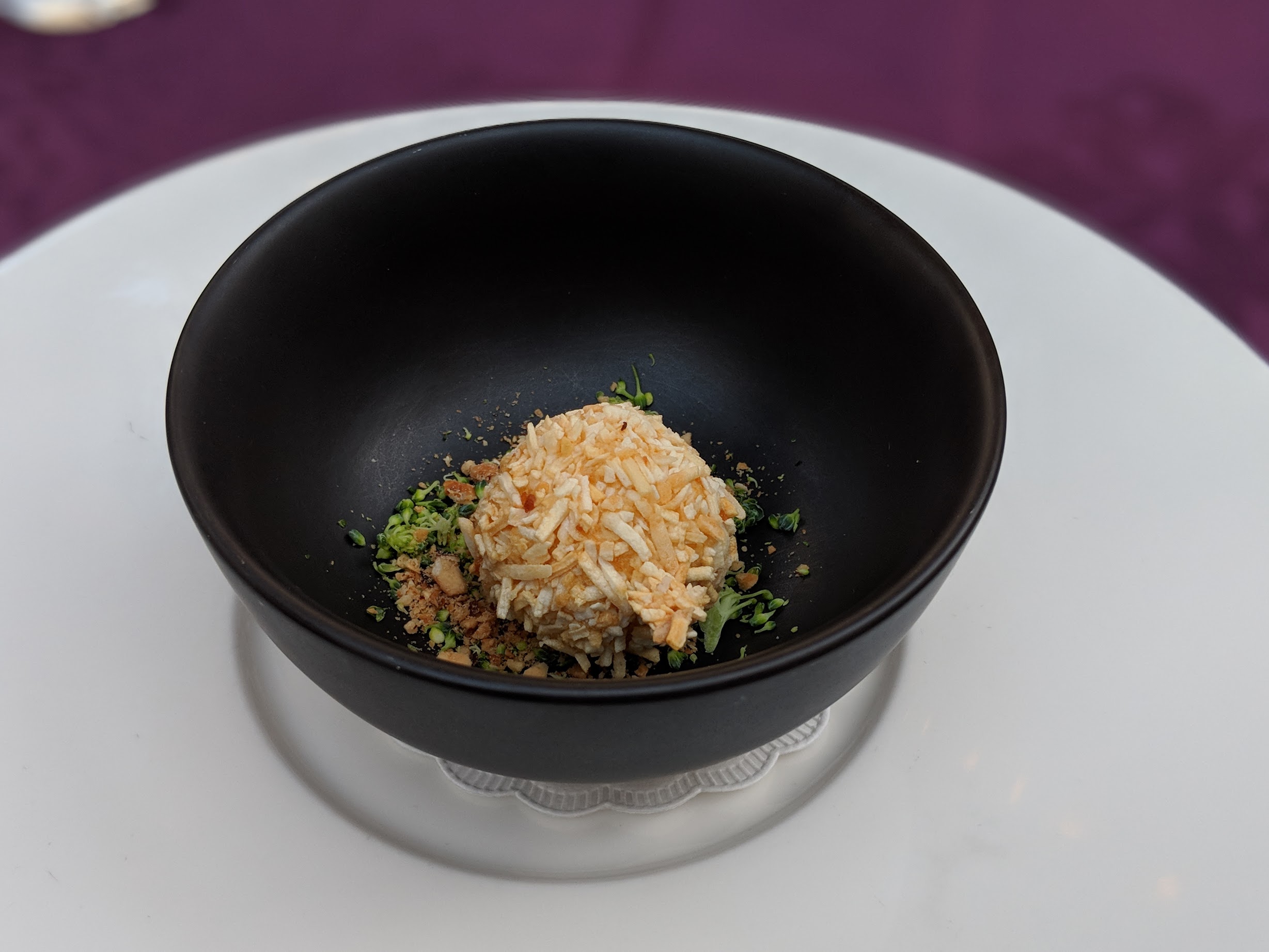 This was cool. We were first presented with a beautiful bowl of breaded cream cheese and some spices that gave off a super fragment umami aroma. Then, piping hot broccoli cream soup was poured in – melting the cheese ball and getting infused with the herbs and spices. 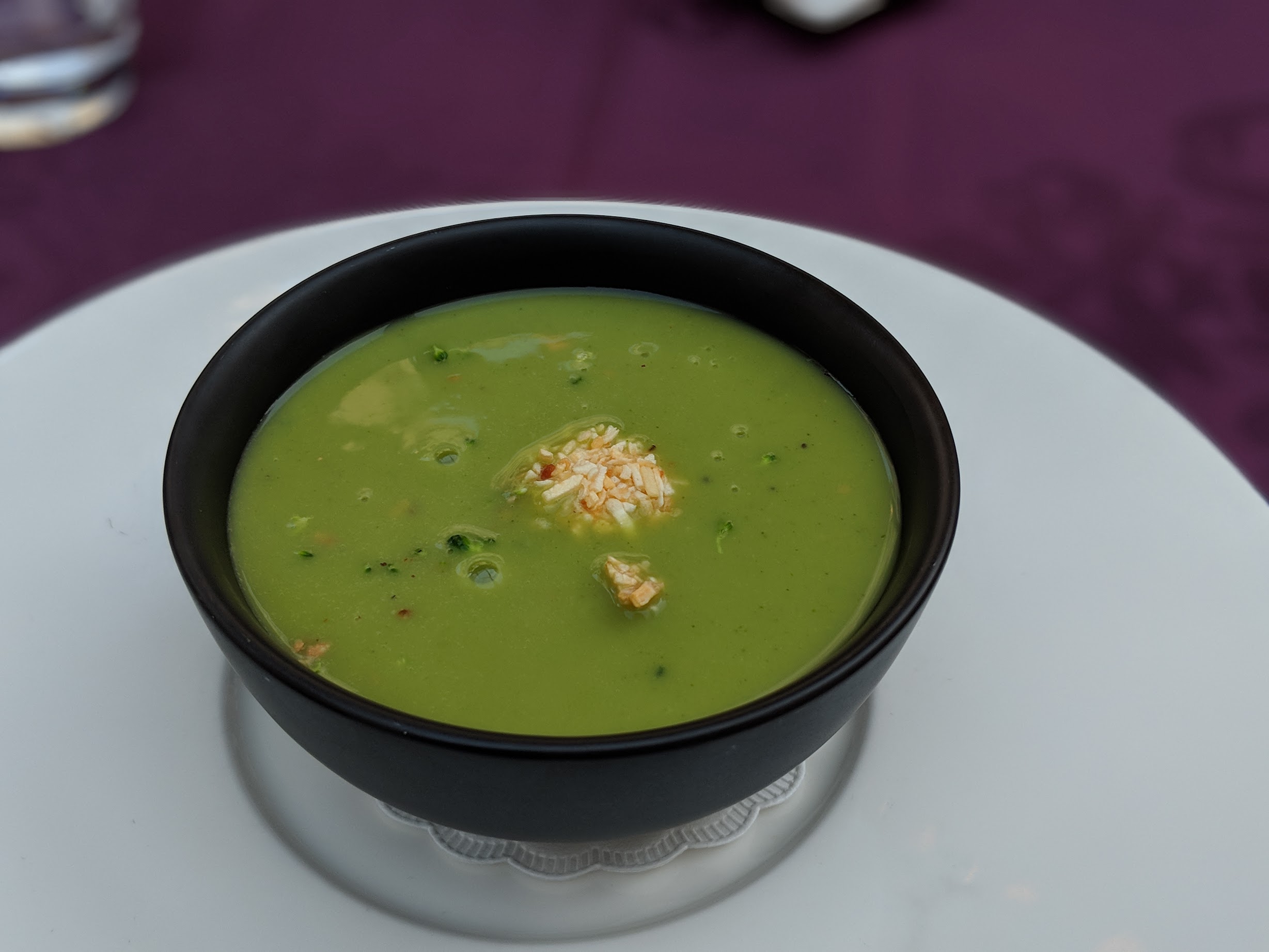 I admit that I’m a sucker for soup, but for me this was the best dish of the night. The soup was creamy without being too heavy and really captured the essence of broccoli without being overpowering. 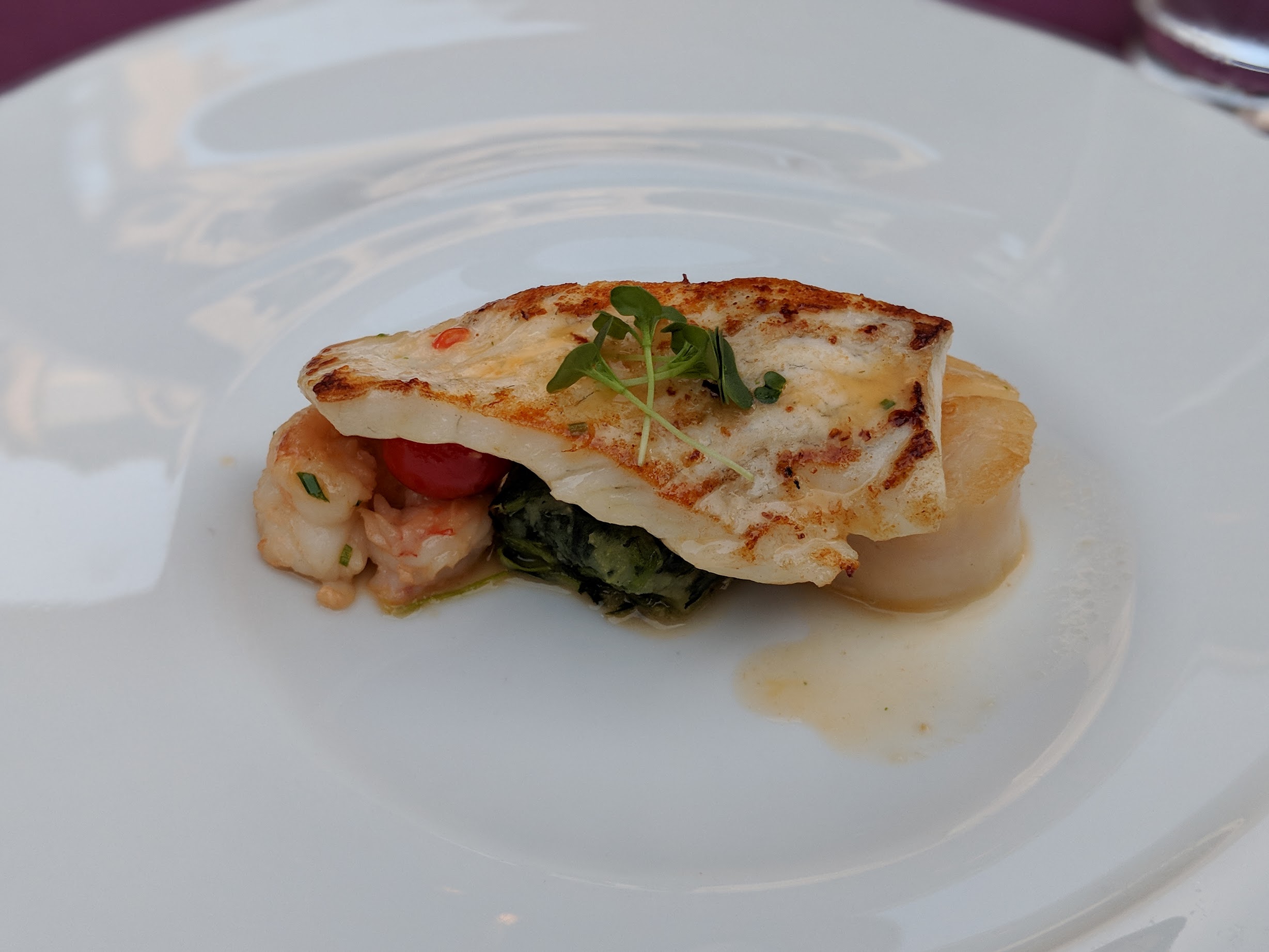 Next up was the Turbot Fillet with shrimp, swiss chard and potatoes drizzled in prawn sauce.

Turbot, in general, is a pretty mildly flavoured fish so the texture and sauce are really important in how the flavour shapes up. In this case, I thought restaurant Dubrovnik did a great job; the fish and shrimp were cooked perfectly and were really nicely complemented by the prawn sauce. If anything, I did feel like the swiss chard was a little out of place. It is a bit vegetal, slightly bitter, and could have served the dished better by not being there. 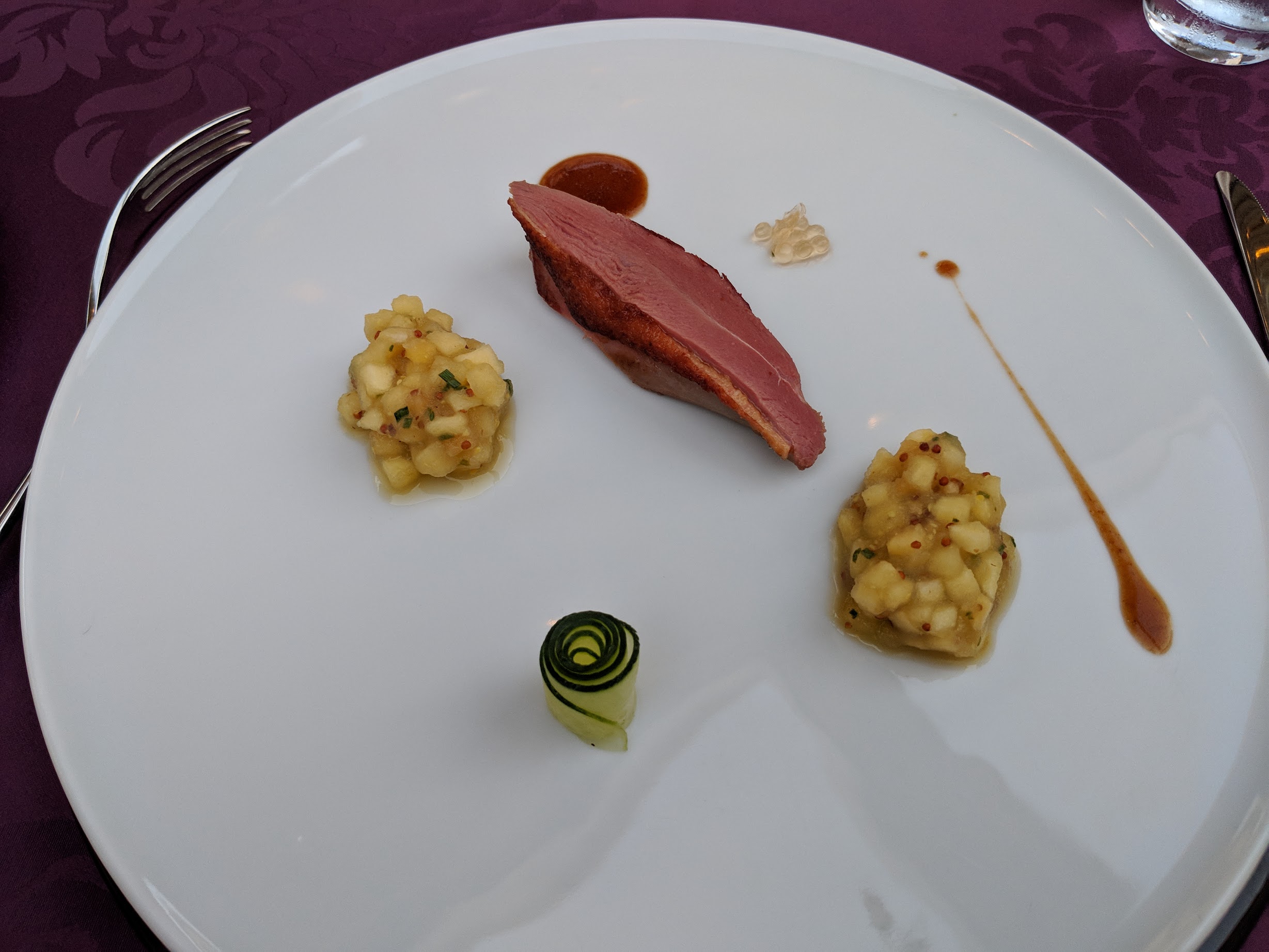 The abstract plating for this dish was little over the top and made me laugh a bit. However, the taste was no joke! To me, high quality duck breast has a kind of sweetness which makes it pair really well with fruity things and the concasse made for a wonderful partner. I would have liked to have a bit more of the plum sauce and I wish they had crisped up the duck skin – which in my opinion, is the best part. 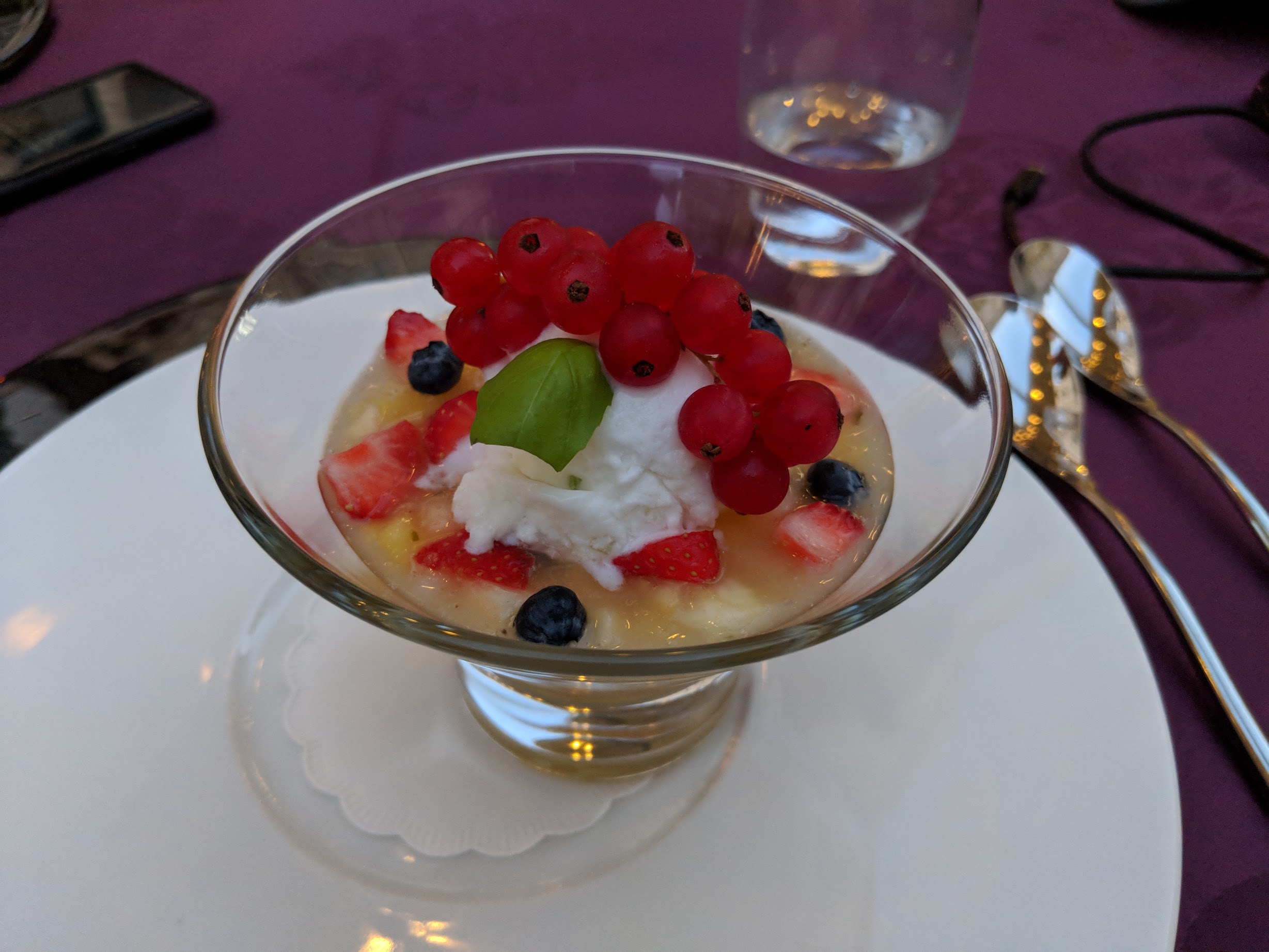 Finally! Dessert! At this point, I was almost about to burst I was so full. Luckily, my stomach is equipped with a special dessert section for these occasions :). (True fact!)

I really love the idea of food deception, where you take one category/style/type of food and make it look like another. This dish combined fruit and ice cream and transformed it into a minestrone (vegetable) soup which was really neat.

The taste was pretty great – I’m glad the dish wasn’t overly sweet as the sugar was cut down by the tartness of the lemon ice cream. It would have been perfect if not for the red berries. They were incredibly sour and were not edible whatsoever. 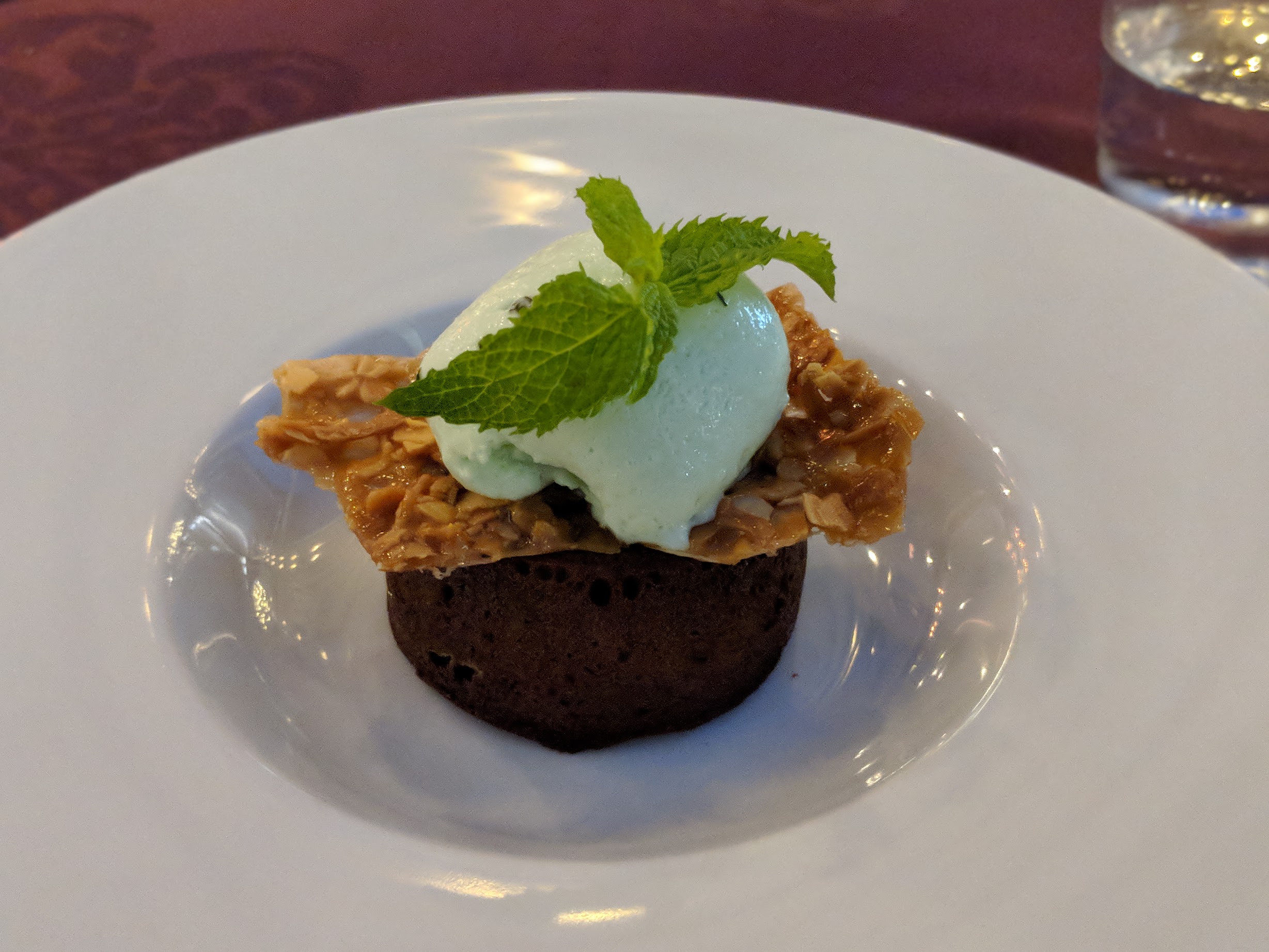 Chocolate overload!!! I wished I had saved space in my stomach for this one (dessert section has low capacity) because it was probably the best dessert I’ve ever had. It came to us piping hot straight out of the oven. I’ve never tasted something so chocolately and rich as the truffled chocolate lava or anything as unique as the white minty chocolately mousse that carried a marshmallow-like texture. Fantastic.

Service: 3/5
At first, the service was really good. We got a lot of attention from our server and he was really patient about explaining what went into the dishes. However, as the dinner was winding down it became difficult to find him and we spent almost half an hour waiting to get the check and pay the bill.

Value for price: 5/5
At around $110 USD per head in total for the meal, Restaurant Dubrovnik is an amazing value for a fine dining experience.

Credits:
Photo creds for the food go to my travel buddy Andy 🙂